The 2nd International Symposium on Advances in Pharmaceutical Analysis will take place at: 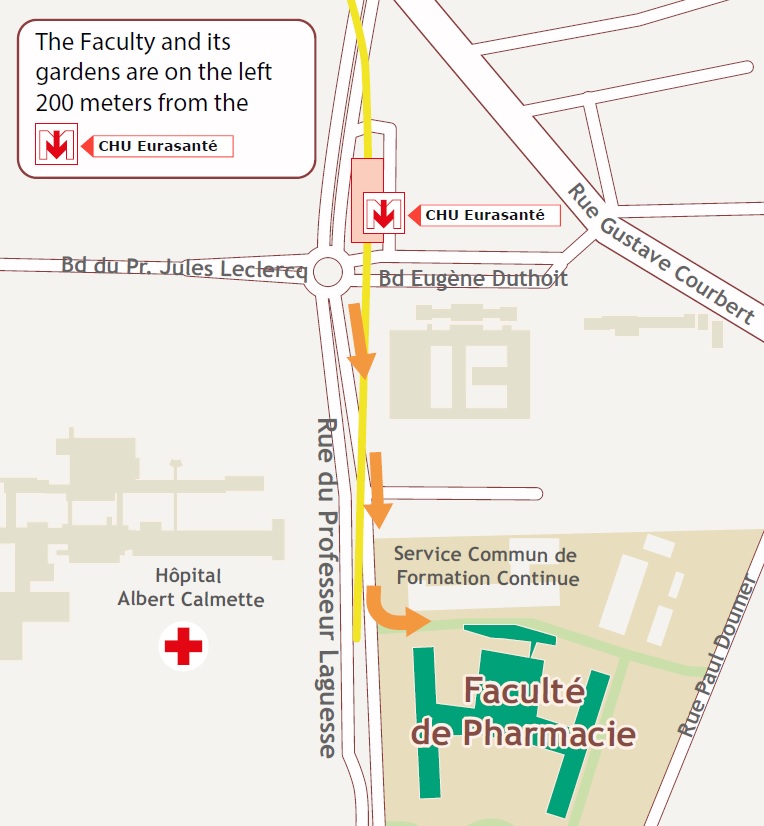 How to get there?

From one of the two stations, Gare Lille-Flandres and newer Gare Lille-Europe, take the Metro 1 towards C.H.R. B-Calmette. Stop at the metro station 'C.H.U. Eurasanté' and follow the directions 'Faculté de Pharmacie'.

From Paris, Brussels or Ghent follow Dunkirk on the A25. Exit 4 towards 'Centre Hospitalier' and follow the directions 'Faculté de Pharmacie'.

From London, Calis or Dunkirk follow Paris on the A1. Exit 4 towards 'Centre Hospitalier' and follow the directions 'Faculté de Pharmacie'.

Lille's two main train stations, Gare Lille-Flandres and newer Gare Lille-Europe, are 400m apart on the eastern edge of the city centre. They are one stop apart on metro line 2.

Gare Lille-Europe: topped by what looks like a 20-storey ski boot, this ultramodern station handles Eurostar trains to London, TGV/Thalys/Eurostar trains to Brussels-Midi, half of the TGVs to Paris Gare du Nord and most province-to-province TGVs.

Gare Lille-Flandres: this old-fashioned station, recently spruced up, is used by half of the TGVs to Paris Gare du Nord and all intra-regional TER services.

From both railway stations you can take the subway to the conference venue.

Brussels Airport connects to 200 European and International destinations in more than 65 countries, allowing 500 million European inhabitants to reach Brussels in less than 3 hours. The airport is connected with the station Brussels Midi where you can take the train to Lille.

Paris Charles de Gaulle Airport, also known as Roissy Airport, is the largest international airport in France. A direct TGV service allows you to reach Lille in one hour.