EFMC-ASMC'15 will take place at: 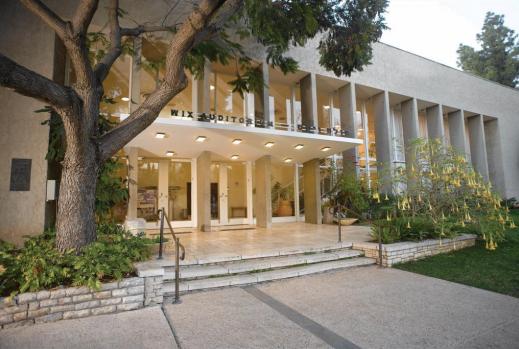 The Michael and Anna Wix Auditorium, designed by the architects Arieh Sharon and Benjamin Idelson in 1955, is the largest performance hall (620 seats) on the Weizmann Institute campus, with a large, well-equipped stage. True to Modernism, it lacks decoration; its majestic splendor is inherent in the building itself.
The Weizmann Institute of Science is one of the world’s leading multidisciplinary research institutions. Hundreds of scientists, laboratory technicians and research students working on its lushly landscaped campus embark daily on fascinating journeys into the unknown, seeking to improve our understanding of nature and our place within it.

How to get there ?

Getting to the Institute by Bus

Almost all of Israel's cities have a central bus station which facilitates inter- and inner-city travel. The major cities have frequent travel schedules (for example: departure every 5 minutes from Tel-Aviv to Haifa or Jerusalem; departure every 20 minutes to Rehovot).

Egged has a user-friendly web site in both English and Hebrew.

The Institute is located in the northernmost section of the city, so if you are approaching Rehovot from the north (i.e. from Tel Aviv, etc.), you don't have to go all the way to the central bus station. Get off at Hanassi Harishon Street and Herzl; you will have just passed the Institute on your left.

If you decide to stay on the bus until you reach the central bus station in Rehovot, there are a multitude of local buses which go to the Weizmann Institute (ask at the information window), or you can take a taxi from the taxi stand directly across the street from the bus station.

Getting to the Institute by Train

Travel to Rehovot by train is also possible from many cities in the North and South of the country. This service is fast and inexpensive. The train station in Rehovot is within easy walking distance to the Institute.

Israel Railways maintains a friendly and helpful web site, in Hebrew, and in English.
Information is also available at 03-611-7000.

Getting to the Institute from the airport

In order to get from the airport to Weizmann, take a taxi. Taxi services are regulated and the Taxi companies operate under permission. It is recommended not to use random Taxi services, but to approach the Taxi dispatcher. The Taxi Rank and the Supervisor's Station at Terminal 3 are on Level 2 of the Multi Level Road. Ask the driver to take you to Rehovot, to the Weizmann Institute. The cost should be around NIS 160 (approximately $40 US dollars), and the ride should take around 30-40 minutes.